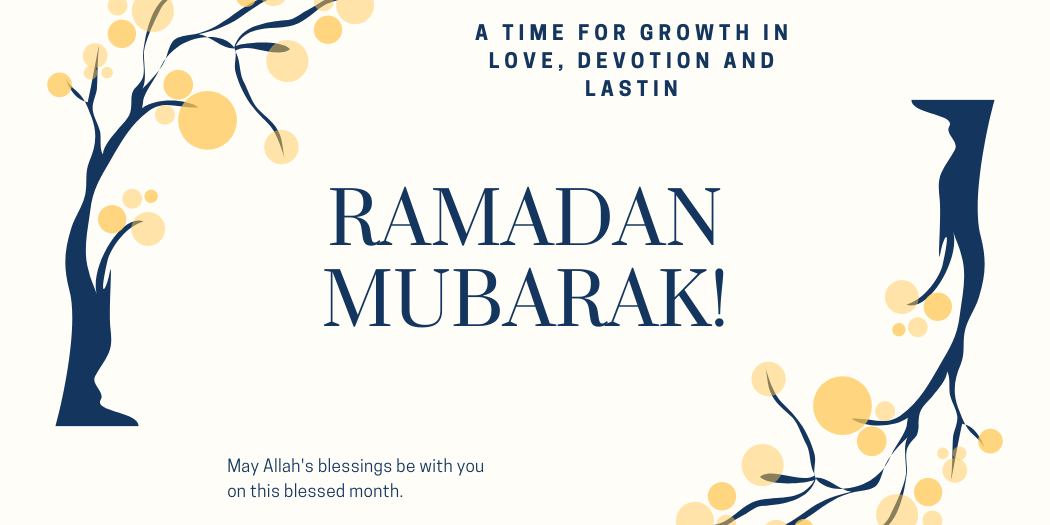 A Ramadan Message: A Time for Growth in Love, Devotion and Lasting Change

The time for Ramadan is here again (possibly April 23rd or 24th), so once more we will be actively involved in Ibadat, or acts of devotion, including fasting, prayers, Taraweeh, late night prayers, Quran recitation, and other forms of worship. However, before we become too engaged in our Ibadat, let’s remember our larger goals for this month so that we can make the most of the coming days and weeks. Therefore, as part of our Ibadat and obedience to Allah this Ramadan, let us seek to improve our relationship with Allah by asking for His forgiveness and blessing, getting a broader perspective on doing good, striving to excel in all good acts, and making lasting changes in our inner and outer lives.

First and foremost to remember as we engage in the various Ibadat during Ramadan is that these acts of devotion offer us the opportunity to get closer to Allah and to increase the love we have for Him in our hearts. As Muslims, our faith requires that our love for Allah and his Prophet (Sallalahu alaihi wasallam – May the peace and blessings of Allah be upon him) supersedes any love we have for any other object or creation. Many scholars agree on the basis of sound ahadith that Allah creates the individual—his soul and his heart—in such a way that his natural tendency is to love Allah. However, as a person’s heart is gradually intruded upon by doubts, desires, and temptations, that love has to be rekindled from time to time through both faith and knowledge.

Ramadan provides us with the perfect opportunity to increase the love we have in our hearts for Allah by devoting this period to perfecting our Ibadat. For example, as-salat (prayer) is one of the key Ibadat we will engage in during Ramadan, so during this time, we can focus on increasing the quality and khushu of our prayers. For those new to Islam, “khushu” refers to the soft, silent, humble, devoted state of the heart in prayer as it stands or bows before Allah. We can improve this state during that Ibadah by perfectly focusing our hearts and minds on our prayerful recitations and on Allah.

“When one of you stands in prayer, he is conversing with his Lord, so let one of you know what he is saying to his Lord and do not raise your voices above one another in reciting when praying.”

The importance of prayer is also evident from this hadith, in which Abu Hurairah quoted the Prophet (SAW) as saying:

“Whoever goes to the mosque in the morning and evening, Allah will prepare for him an honorable place in Paradise every time he goes and comes.”

We should use the same principle when engaging in other Ibadat such as reciting the Quran, performing dhikr (the remembrance of Allah), giving charity, and other devotions. Let’s make sure, therefore, that our intentions when performing Ibadat are solely for the purpose of pleasing Allah and that we devote our worshipful efforts to increasing our love for Him in our hearts.

Broaden the scope of your good deeds

In Islam, the practice of good deeds extends beyond the realm of such Ibadat as prayer and fasting. Unfortunately, for many devout Muslims, the broader definition of good deeds is often lost. Many Muslims are quite steadfast in prayer and fasting, but they tend to be less committed to other moral standards stressed by both Allah and His Prophet (SAW). Ramadan provides us with an excellent opportunity to broaden our horizons when doing good deeds, as we have repeatedly learned from both the Quran and the hadith but rarely practice in our lives.

In another hadith quoted in Sahih Muslim, Abu Huraira narrates that the Prophet (SAW) said:

Doing such good deeds during Ramadan could earn us even greater rewards. However, let’s make certain that whenever we perform any good deeds or charity, we don’t boast about them by telling other people. Good actions are solely for the purpose of pleasing Allah, so whatever we do should be between Allah and us. Abu Bakr As-Siddiq (RA) related Allah’s Messenger (SAW) as saying:

“… one who keeps reminding people of what he has given, will not enter Paradise.” (Tirmidhi)

Raise your standard for doing good

Islam encourages us to constantly increase our levels of doing good. Efforts of this type, which we would not normally do except for Ramadan, help us to improve even further. We know that even the behavior of the Prophet (SAW) became better during Ramadan. Many ahadith tell us that the Prophet (SAW) was the most generous person, and he was even more generous during Ramadan. During that time, he would give more in charity and treat people even more kindly than usual. He would also devote more time to reading the Quran, praying, reciting dhikr, and spending time in I’tikaaf (retreat).

“And nothing he was asked for but he would give it.”

Al-Bayhaqi, too, reported that ‘Aaishah (May Allah be pleased with her) said:

“When Ramadan would start, the Prophet (SAW) would release all prisoners of war and fulfill the need of every person who would ask him for something.”

In the light of that guidance and motivated by Allah’s promise to reward us more during this month, we should push ourselves to increase the range and quality of good deeds in our lives.

With all its blessings and opportunities, Ramadan shifts us into high gear for increasing our obedience to Allah and seeking His pleasure. Yet, though many of us start this period with enthusiasm, our usual habits often prevent us from achieving permanent change. So as we start the month of Ramadan, let’s dedicate ourselves to real, lasting change—to increasing our heartfelt love for Allah and reflecting that love in our daily actions. We can do this best by leaving behind what He dislikes and wholeheartedly embracing the good, not only during Ramadan but throughout the entire year and, even better, throughout our entire lives. To encourage sustained change, we must allow the seed of sincere intention—the gift from Allah of our true nature—to grow in our hearts and guide our behavior. In doing so, we will notice that Allah will lighten things for us and elevate our status in this life and the next.

Remember the Hadith Qudsi, which says:

The Prophet (saw) said that Allah (swt) said..“… if he (my servant male & female ) comes one cubit nearer to Me, I go a distance of two outstretched arms nearer to him; and if he comes to Me walking, I go to him running.”

Since permanent change requires breaking through old habits and mental barriers, let’s ponder what our pious predecessors tell us about the kind of effort needed to effect a lasting change:

Sometimes doing good may involve a lot of patience, so let’s remember that Allah rewards us according to the effort we expend. The Prophet (SAW) said:

“Ahead of you there lie days of patience, during which being patient will be like grasping a hot coal. The one who does good deeds then will have a reward like that of fifty men who do such deeds.”

In conclusion, as we hope and pray for Allah’s mercy during this time of Ramadan, let us all focus on the lasting transformation of our hearts and souls. Let us shed what is impure and untrue while strengthening the good and the true so that the change that follows can carry us forward through our remaining days and years, both on this earth and in the hereafter.